It 24 of March 2016, and as I am typing down this post; my mind and eyes are juggling through two activities. One, sourcing memories from the March 2015 when I was in Maheshwar, visiting the Ahilya fort, its Narmada ka kinara and meandering through its Bazaars which flaunted the Maheshwari textiles. And the other, peeping through the corner window of my room to catch a glimpse of kids and adults playing the festival of colours i.e. Holi. I am a keen player too, but incidently I have caught a flu and decided to stay indoors.

I travelled to Maheshwar a year back i.e. 2015, this post is in continuation with my Bhopal and Mandu trip. Maheshwar is a small textile town nestled on bank of river Narmada, further some 90 odd kms from Indore.Other than its weaving, it also houses a beautiful little fort and ghat built on the edge the river. The fort named after the queen Ahilya Bai Holkar. The locals, out of reverence and adoration for her philanthropic activities towards the town of Maheshwar, called her devi Ahilya.

A woman weaves a sari on a traditional hand-loom

The story of the textile

The Royal family of Holkars have been a continuous support for the weavers of Maheshwari. In late 20th century, they started Rehwa Society, which is an NGO supporting the weavers socio-economic development. They are based in the Ahilya fort and I had the chance of seeing a 56 consolidated looms at work. I still remember the clamour that gets churned out of these looms working together. At first it might be a bit annoying, but give yourself some time (of about 20 min.) your ears will get acclimatise to the clamour and you shall begin to appreciate what it takes to produce a piece of textile. Weaving is a slow process and it takes tremndous precision and patience. It is repetitve and nature and can get mundane in process, thus to rescue weavers out of boredom there is always some music being played in backdrop (either in person or through a radio fm).

After spending some peaceful time at Rehwa, I decided to step into the main fort and its adjoining river bank. The Holkars have still kept substantial part of the palace as a private property, the rest is open to public (part museum and part open public  space like Chatris, temples and River Ghats). The museum like any other one in India is fairly mundane but I liked the setting of it. It got me familiarized with the chronological political events and throne succession story. In absolute, I didn’t quite gained from it but on relative terms I was able to  gain a sense of why Queen Ahilya was so important to Maheshwar and its people.

I walked out of the museum to see the expanse of Narmada river and the picturesque setting of Fort. Though the extent of the ghat is small, its actually one of the best and cleanest ghats I have ever come across. Here I spent quite some time day draming in shade while lazily gazing at the river and of course, drawing. It was the end of spring, the breeze was turning warm and the sun harsher, so in the peek of afternooon I decided to take a siesta. Here is a short pictographic account of what I drew (and its process). 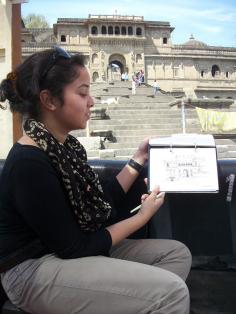 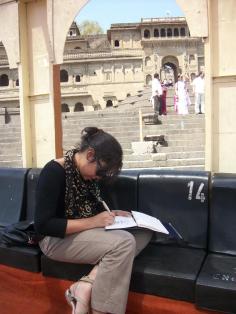 My Sketching Adventure- I

After the siesta, I roamed through the Bazaars and local settlements, and found that every household (atleast 85%) are involved in maheshwari textiles business. I roamed off to weavers houses, talked to them , saw them at work, heard them discuss their craft, played with the children who had some indegenous games made out of threads and old loom. Well frankly, a day is too less to be spent at a weavers house to even get a taste of how these threads manifest in form of a cloth. But experiencing this has been quite a strong memory, now that I realise it has been over a year when I am jotting this down, for I can still clearly relive that entire day.

I called it a day with a boat ride in Narmade and a goodbye to Maheshwar. But before I take the leave, here I share a candid picture of two aamzing people I met in Maheshwar. They were my travel guide and companion (for Mandu & Maheshwar trip). Thank you Santosh Uncle and Vikas Bhaiya. 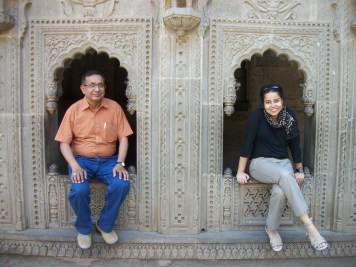 me and Sarosh Uncle

Me and Vikas Bhaiya

4 thoughts on “Maheshwar …Of its fort & textiles”